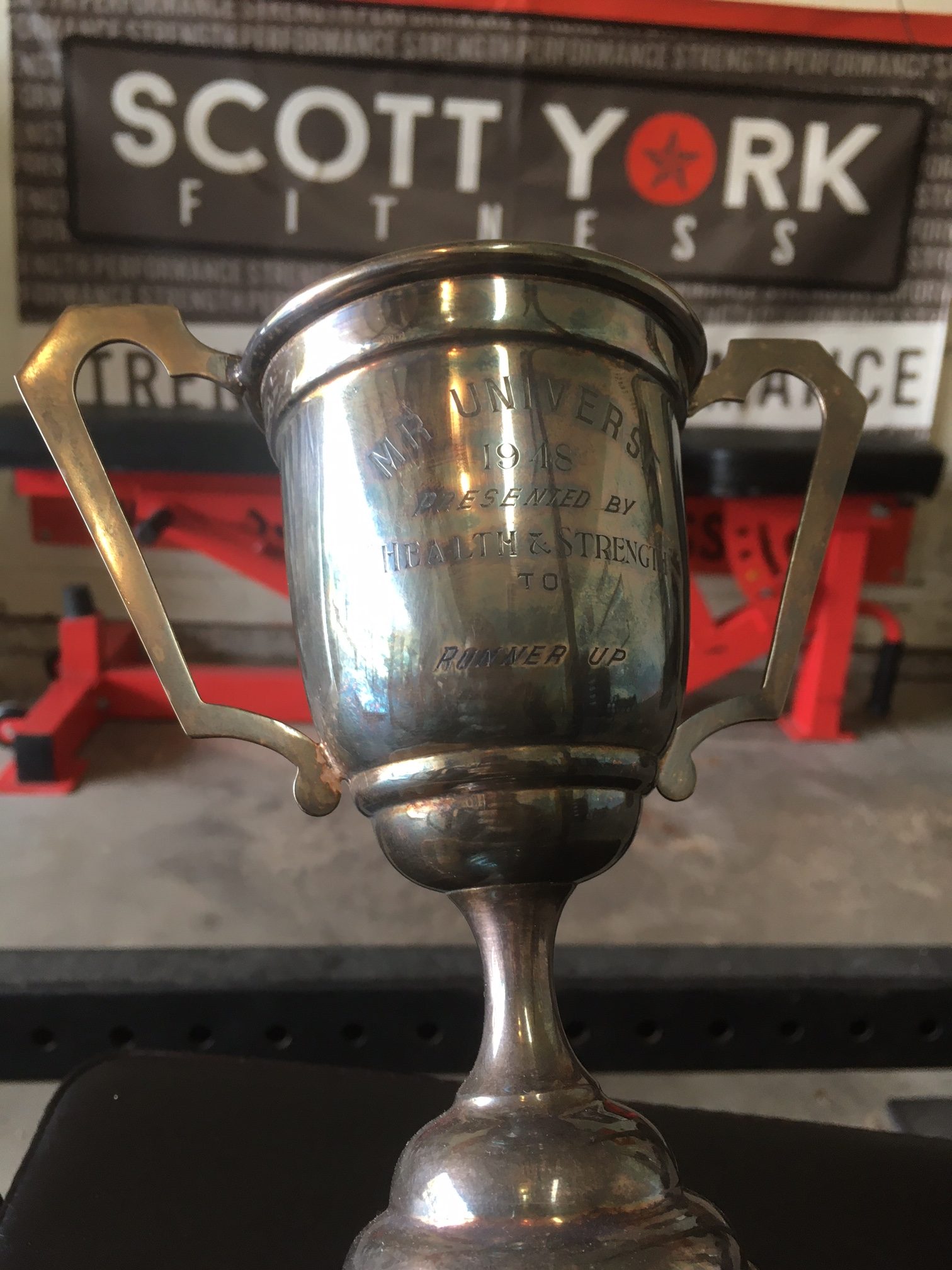 This is the story of the 1948 Mr. Universe contest as told by H & S ( Health &Strength) league who later became NABBA (National Amateur Body-Builders’ Association).  This trophy from the historic 1948 Mr. Universe Bodybuilding Contest is now in my collection.

1948 MR UNIVERSE ( A lightbulb idea by Health and Strength League -later to be NABBA).  In early 1948 a meeting was called between the committee of H & S ( Health &Strength) league and the committee of BAWLA ( British Amateur Weightlifting Association).  On the agenda at that famous meeting on 2nd January 1948 was an idea to host a Mr. Universe to coincide with the Olympic Games in London later that year. It was agreed at the meeting that H & S league would organise the show. They started by sending letters to all weightlifting associations, sporting organizations, and Sports journals worldwide.

The response was excellent and a lot were happy with the idea. It was decided that a team of international and impartial judges would be chosen. George Walsh of Uk was picked as Chairman of judges, his team was George Greenwood 🇬🇧 ( who replaces Bob Hoffman 🇺🇸 owner of York Barbell company, because John Grimek was competing Bob said because of their friendship he could not judge, he did come to contest), George Hackenschmidt 🇺🇸, Tromp Van Tiggelen 🇿🇦, George Bankoff 🇬🇧 , and Gregor Arax France 🇫🇷… The rules would be – -it would be an open contest with amateurs and professionals competing on level terms. Classes were to be decided on Height divisions with 4 Classes, class 1,2,3 and 4 .. Class 1 is 6ft and over, Class 2 is 5ft 9 to 5ft 11, Class 3 is 5ft 6 to 5ft 8.3/4, Class 4 is under 5ft 6. They were to be judged on Physique, physical ability, and agility.

The day of the event arrived Friday 13th of August 1948. The venue was the beautiful Scala Theatre London, with over 1,800 spectators paid to watch the event.  At 11 am 39 competitors were pre-judged. At lunchtime, a meal was provided at the Holborn restaurant for the judges, International competitors, and officials.  At not long past 2 pm Class 4 took to the stage ..which had very bright lighting and a seriously dark velvet curtain background. Britain, Iran, Burma, South Africa, and N Ireland all had representatives in Class 4 .. Mahmoud Namdjou of Iran and Dan Dorans of the Uk were 1st and 2nd .. this result went down well with the audience.

Class 3 led out by a magnificent Andre Drapp of France and the audience went wild when John Grimek of the USA shortly followed him .. representatives of Burma, Britain, Northern Ireland, Jamaica, India, Guyana all competed in the class. John won the class with Andre 2nd.

Class 2. Was in a way a bit of an anti-climax, even though the standard was good, no one really stood out. Charlie Jarrett H&S Mr. Britain 1948 (note H&S Mr. Britain became NABBA, Mr. Britain, in 1957) won the class with London’s Ted White finishing 2nd .. 4 more Britain’s and 1 West Indian made up the class.

Class 1. There were only 3 competitors in class 1 but they were excellent, to say the least, and all had contrasting physiques. The famous Steve Reeves USA was big with very broad shoulders, exceptional calves, and a very small waist, Reub Martin USA was solid with a lot of muscle on back and neck, while Oscar Heidenstam ( who became NABBA President in 1955) .. had a very classic physique. Steve Reeves won the class. 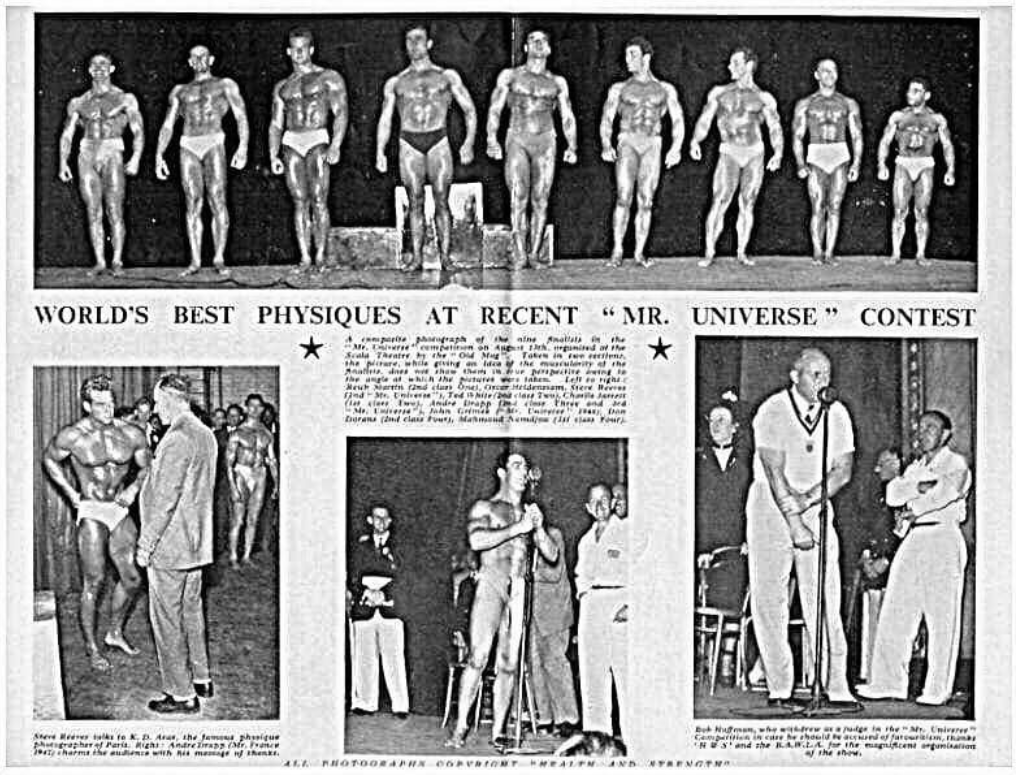 With the class winners announced the judges decided to lineup 9 men as finalists and then pick 3 of these 9 to battle it out for the title of Mr. Universe. The 9 men were Reeves, Grimek, Heidenstam, Doran, Drapp, White, Martin, Namdjou, and Dorans.  Out of the nine .. Andre Drapp France, Steve Reeves USA, and John Grimek, USA was chosen as the ultimate finalists and were given 5 minutes individually to show their physique, ability, and agility to the audience and judges.

Steve and Andre posing etc were excellent and the audience was highly impressed.. but John Grimek gave an amazing display of posing, muscularity, and agility that as one reporter said he thought the roof would come off the Scala with the audience response. By the time he finished with the splits. Everyone could easily guess that he was going to be crowned 1948 Mr. Universe.., Compere Oscar Store then President of British Amateur Weightlifting Association called up Chairman of Judges George Walsh to the microphone. George announced Andre 3rd, Steve 2nd, and John Grimek the 1948 Mr. Universe winner. The place went wild. Well-wishers, photographers, officials were all super excited .. Steve Reeves was gracious in defeat and said over the microphone “John Grimek is the greatest bodybuilder who ever lived “. John retired after the contest, undefeated in competition.  The proceeds of the contest – the sum of 421 pounds sterling, 18shillings, and 10pence went to the British Olympic Weightlifting fund. 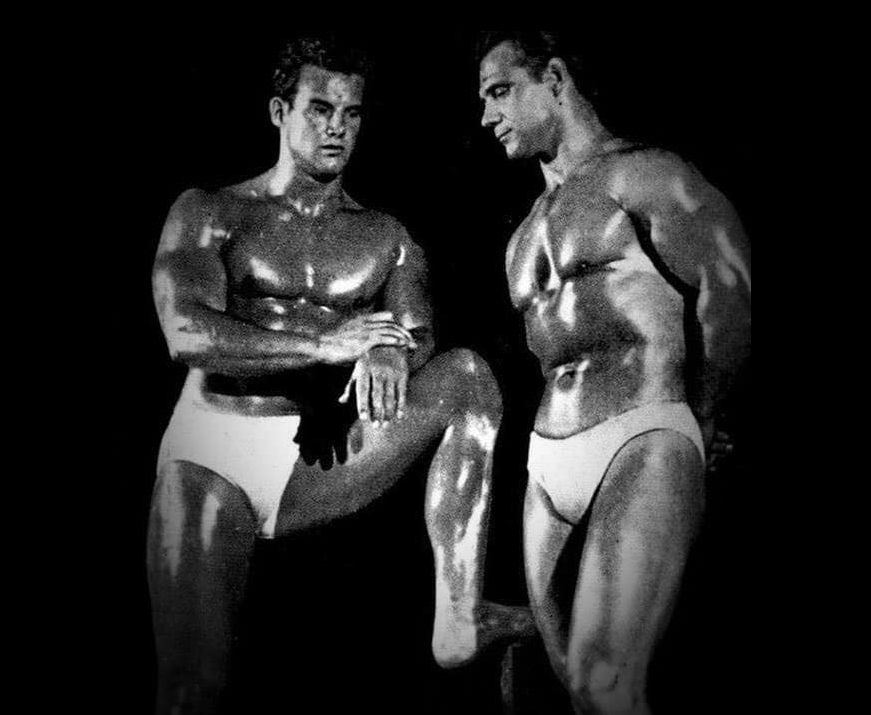 The contest was such a success that members of the Health & Strength league who helped organise and fund it decided to work on setting up the National Amateur Bodybuilding Association with the idea of not just promoting physical culture in men and women but with an idea of holding an official Universe every year. This of course happened in 1950 when this Federation known as NABBA hosted the 1950 NABBA Universe… To this day it is still going strong and will hold the 70th official NABBA Universe in Bradford on the 7th of November 2020.

An unbelievable achievement and the most historic and prestigious event in bodybuilding history. All bred from the idea of great men of the sport.  I’m sure Oscar, Steve Reeves, John Grimek and so many more would be proud to see this legacy carry on to this day.

Join the discussion and tell us your opinion.

Steve Reeves should have won, by far. He had such a superior physique.