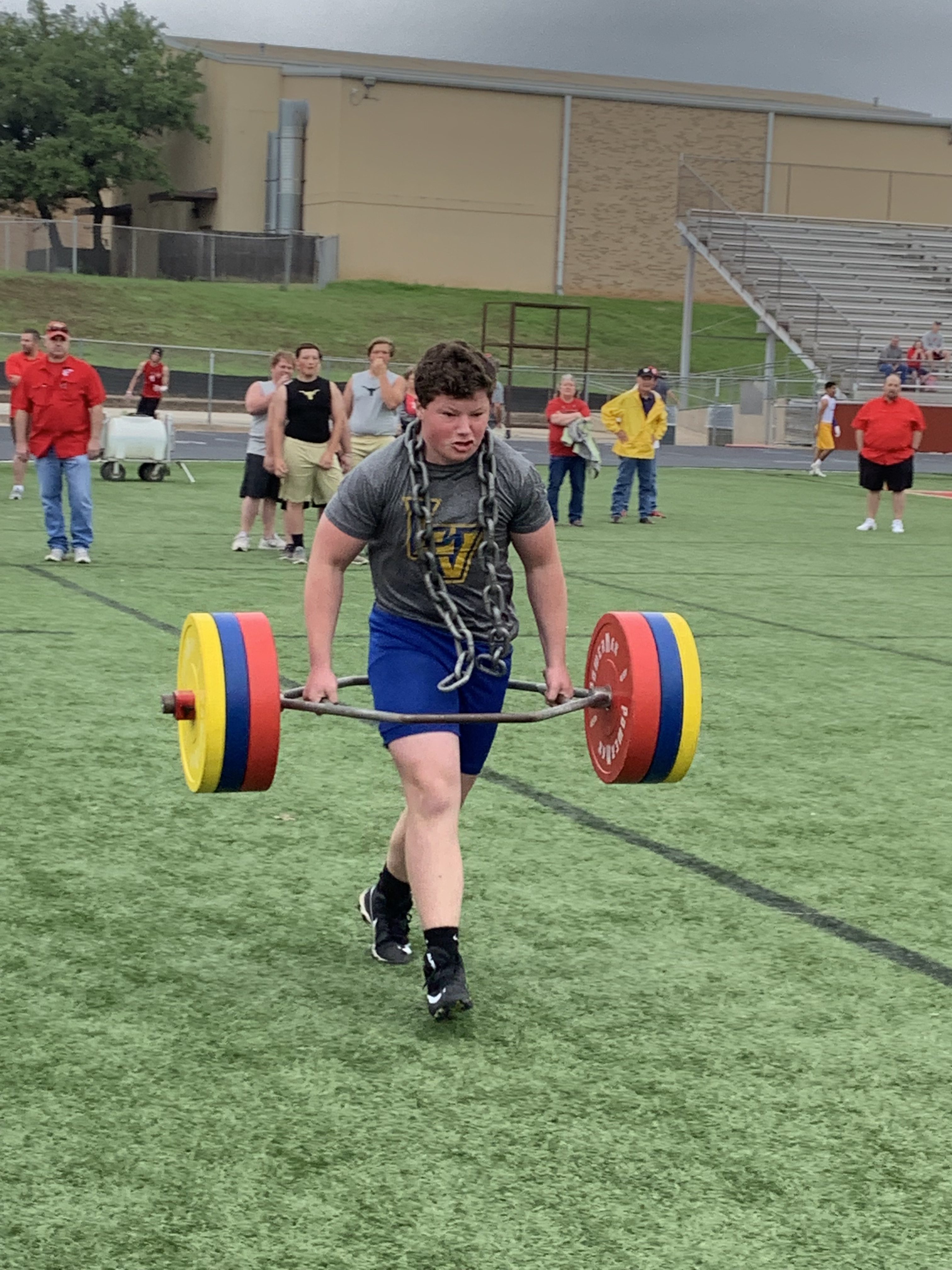 If You Measure It, You Can Improve It – Peter Drucker

“When you think about this quote, it should immediately become apparent how true it is. Because, if you can’t measure something, and know the results, you can’t possibly get better at it.

It’s like trying to improve your golf game, but never keeping score, so you don’t know if you’re actually getting better or not. Makes sense, right?

If you don’t know Peter Drucker, you should: he’s known as the man who invented modern business management. He wrote 39 books on the subject and is widely regarded as the greatest management thinker of all time.”

What does this all have to do with strength and performance?

This is the time of the year when we (athletes at Scott York Fitness) set our Summer Goals.  After giving it some thought, each athlete writes down his or her name along with their bench press, squat and deadlift goal on the publicly displayed clipboard.  At the end of the Summer, the goal is to achieve that weight on each of the 3 lifts.  This helps us focus, gives us something to work towards, teaches us the importance of goal setting.  We do a lot more than just performing these 3 lifts, but they are our bread and butter.

“If you measure it, you can improve it.”

Let’s say that “Tim” is going to be a freshman in high school, is 14 years old and weighs 135lbs.

It’s Summertime!  Tim rolls out of bed around 9 am, checks his phone for social media activity and then hits the shower.  He heads to the kitchen around 930am and has sugary cereal and milk.  Next, he fires up the Xbox and plays video games for an hour and a half.  Now it’s 11 am and Tim hasn’t set himself up for a productive day IF he wants to be a top-notch athlete.  Next, Tim gets invited to the lake to hang out with friends for a few hours but Tim forgets to bring something to eat.  At 2 pm all Tim has had to eat is cereal and milk.  He’s starving!  When he gets home at 2:30 pm, he reaches for some cold cheese pizza in the refrigerator and plops down on the couch.  After eating about 1000 calories of cheese pizza, he’s full so he falls asleep for an hour and a half.

At 4 pm, he wakes up, checks his phone for social media activity, then heads back to the Xbox for an hour.  After that, he goes outside to shoot some baskets until dinner time at 6 pm.  For dinner, he has a burger, fries and a coke.   That’s another 800 calories.  So far today, he’s eaten around 2200 empty calories.  Tim stays up until 1030pm with one eye on a movie and the other eye on his phone.  He falls asleep for the night.  This becomes Tim’s base schedule for the Summer other than the occasional high school “open gym” workout.  If he’s lucky, he’ll gain a few pounds of body weight and add 5-10lbs on his lifts.

It’s Summertime!  Tim rolls out of bed at 745am and has breakfast.  Breakfast consists of 2 breakfast tacos made with eggs, cheese and potatoes.  This breakfast consists of around 700 calories and 40 grams of protein.  Tim has a workout at 830am.  Once Tim arrives at the workout, he weighs and warms up.  For today’s, workout Tim is doing bench press, bar dips, parallel bar push-ups, EZ bar curls, and a short metabolic conditioner.  Tim will be working within 65, 75 and 85% of his 1 rep max on the bench press.  The metabolic conditioner will last around 5 minutes and will consist of sled pushes, kettlebell cleans and soft foam single leg box jumps.  Tim’s met-con time will be recorded and compared to the other athletes to see who got the best time.   After the workout, Tim feels tired but accomplished.  He drinks a protein shake that he brought with him to the workout.  Tim gets home at 11 am and takes a shower.

Next, Tim gets invited to the lake to hang out with friends for a few hours and remembers to bring some water, almonds and an apple for a snack.  When he gets home at 2:30 pm, he eats another meal consisting of a turkey sandwich on whole grain, baked chips, yogurt, and trail mix.  Tim has already eaten around 125 grams of protein for the day, is energized and feels great.  Tim heads to the Xbox for an hour and then goes outside to shoot some baskets until dinner time at 6 pm.  For dinner, he has spaghetti with meat sauce and Italian bread.  Tim logs his food and activity in his workout app and sees that he needs to eat another 400 calories in order to reach his daily calorie goal before going to sleep in a couple of hours.  Tim spends the rest of the evening watching a movie and keeping up with his social media.  With this approach, it’s possible that Tim can gain up to 25+lbs of “good” body weight and add anywhere from 20 – 50+lbs on his lifts.

Let’s compare what got measured in the 2 different approaches.  In approach #1, nothing gets measured.  This, unfortunately, is pretty typical.  When I was a teenager, my approach was the same.  Sure, I had a lawn to mow, trash to take out, jobs here and there but nothing was measured, nothing was really planned.  I had no goal.

In approach #2, Tim’s body weight is measured, his weights are recorded, Summer goals are set, he’s using a workout program that is individualized to him and is working within a percentage of his 1 rep max on bench press (and his other main lifts), he’s timed and measured on his met-con and he’s logging his food – keeping track of his calories, protein, carbs, fats, sodium, sugar, etc.

At least 6 areas are measured and recorded in approach #2.

Ladies and Gentlemen, we have a winner!

At the end of the Summer, approach #2 will garner better results.  The athlete will become bigger, faster and stronger with improved confidence and self-esteem.  He will be ready for 9th grade, physically and emotionally.  He will have had so many mental and physical challenges placed in front of him or her during the Summer that he will be more than comfortable in his 9th-grade year.

So what about those athletes who don’t watch what they eat, don’t work out in a monitored setting and still go on to do amazing things in athletics?

My answer is that they could have been even better within a monitored environment. Why leave things to chance?  I can’t tell you how many high school athletes have told me that they wish they had started sooner.  Sooner with the weights (in a professional environment), sooner with monitored nutrition and sooner with a serious, motivated group who want to be held accountable.  When you leave things to chance, most likely you will lose.  When you measure what you can, you take away the “luck” factor and the “I hope” factor.  At the end of your season, you will know whether you relied on luck and hope, or whether you took charge and approached all measurables with an aggressive attitude.  Your record will tell the story.

When I worked in the corporate world (10+ years), I was fortunate to have several mentors who taught me the value of measuring everything that mattered.  I worked my way up from the shipping department, to a buyer, to a supervisor, to a manager who was responsible for a hundred people and a multimillion-dollar budget.  My distribution center in Atlanta won “Distribution Center Of The Year” in my first year there.  Why?  Having a plan, measuring what mattered and being around wonderful people who wanted to do well.  The award was not because of me but rather it was because of our working as a team and not leaving things to chance (having a plan, having a sense of urgency), measuring and listening to the employees.

I’ve simply extracted what I learned in the corporate world and implemented it into my Strength and Performance business.  Passion for what you’re doing helps.  Demanding excellence helps.  Leading by example helps.

*note – I understand that we are dealing with high school kids and that they SHOULD have time to sleep, play video games, go on vacations, as well as do chores, work, etc.  The trick is to set goals and then manage and plan our time effectively so that we have a chance to reach those goals.  Self-esteem and self-confidence are a by-product of having a purpose and working happily and enthusiastically towards that purpose.

** note – thanks to D. Hester for the featured photo in this post!

Thank you! Your program is changing my son’s life.