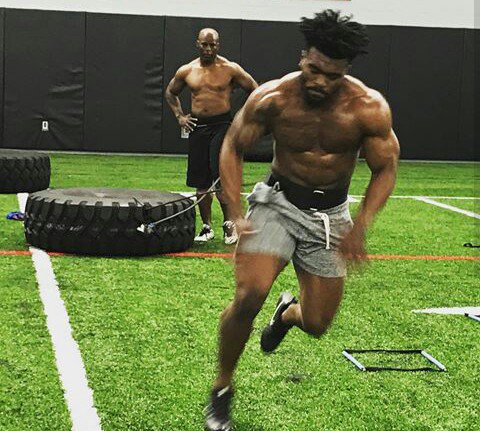 The apple doesn’t fall far from the tree.

Meaning:  a child usually has a similar character or similar qualities to his or her parents.

I was watching college football this weekend and noticed a familiar last name on the roster of the Georgia Bulldogs.

Could it be that the Georgia running back, Elijah Holyfield, is related to former Heavyweight World Champion boxer, Evander Holyfield?  After a quick google search, I discovered that yes, it was.  Elijah Holyfield, #13, is the son of Evander.  I had to know more.

Who Is Evander Holyfield?

Evander Holyfield is an American former professional boxer who competed from 1984 to 2011. As an amateur, Holyfield represented the United States at the 1984 Summer Olympics, winning a bronze medal in the light heavyweight division..  He reigned as the undisputed champion at cruiserweight in the late 1980s and at heavyweight in the early 1990s, and remains the only boxer in history to win the undisputed championship in two weight classes.  In 1996 he defeated Mike Tyson and reclaimed the WBA title, in what was named by The Ring magazine as the Fight of the Year and Upset of the Year. This made Holyfield the first boxer since Muhammad Ali to win a world heavyweight title three times. Holyfield won a 1997 rematch against Tyson, which saw the latter disqualified in round three for biting Holyfield on his ears. (Wikipedia)

Most famous people have reputations that precede them.  To me, Evander has the reputation of being a polite, hard working, nose to the grindstone champion.  Not one to seek out attention, he let his performance speak for itself.  A class act.  A religious man.

Who Is Evander’s Strength Coach?

Evander Holyfield’s longtime (since 1986) Strength and Conditioning Coach is a man named Tim Hallmark.  In February of 2010, a friend of mine and I spent a couple of hours at Tim’s home outside of Wimberley, Texas.  Tim is believed to be the highest paid personal trainer ever  due to the amount that Evander paid Tim to get him in shape for his boxing matches.

Tim met us at the gate to his property, showed us around and then, of course, we headed to his on site gym.  Tim is a passionate, energetic, smart, friendly man. It’s easy to see why he’s had so much success.

We talked about strength training, Evander Holyfield’s training, Tim’s ideas for core programming and much more.  He showed us his memorabilia, equipment that Evander used and more.  It was an inspiring, fun way to spend the afternoon.  I was influenced by Tim, his energy, work ethic and success. I shared this story yesterday with my athletes.  I want them to understand that it’s a smaller world than they think and sometimes you wake up and get to spend time with people like Tim.  Learn from them, be influenced by them.

Who Is Elijah Holyfield?

So back to Evander’s son, Elijah.

Elijah participated in boxing and football until the eighth grade. He said he was “really good” in boxing but chose to focus on football.

“My dad always said you can do everything but you can only be the best in one thing,” Elijah said.  “I think it helps me now to know if he never stopped working, then I know I can’t stop working.” (Influence at work)

Influence.  Elijah was influenced by his Dad.  Evander was influenced by Tim Hallmark.  Who was Tim influenced by?  I’m not sure, I wish I would have asked him but I’m guessing it was someone who led by example, was energetic, and passionate.  It’s powerful.  Kids are always watching to see what Coaches, Teachers, and Parents are doing – work ethic, habits, follow up, treatment of others.   Besides, his Dad, Elijah has been influenced by his Strength Coach and former bodybuilder, Buddy Primm.  Here’s a video of Buddy overseeing the training of Elijah and a couple of other college football players from Georgia Tech and Dartmouth.

If you watch and listen to the first few minutes of the video, you will hear absolute gold!  Buddy will touch upon the commitment that Elijah and the other athletes he trains have, they train with Buddy year round, during Spring Break, Summer Break, their nutrition is monitored, they eat every 3 1/2 hours, 7 days a week.  Buddy is a former bodybuilder and I can assure you that no one knows more about nutrition than bodybuilders.  Buddy also worked with Terrell Owens who was teammates with the hard-working Jerry Rice, but says the biggest boost came from joining forces with Buddy Primm, a bodybuilder who emphasized diet.

“After that first off-season I worked with him, I saw a total difference in my production and the way I felt during the games, during the season,” Owens said.  Buddy trains numerous college and nfl players including quarterback Matt Schaub of the Atlanta Falcons, running back, Verron Haynes formerly of the Atlanta Falcons and Pittsburgh Steelers.  Apparently, in the Georgia area, all of the highly motivated football players go to Buddy.

It was just announced that the Texas Longhorns and the Georgia Bulldogs will face off in the Sugar Bowl on Tuesday January 1st, 2019.  You’ll get an close up look at Elijah Holyfield (#13).  He’ll be running with hard hitting power, confidence and the assuredness that he’s done everything right – in the gym, in the kitchen and he’ll have his Dad, Evander, among others, to thank for being such a powerful influence in his life.

We have the power to influence.  Share experiences, resources, lead by doing, teach kids to aim high, and that there’s nothing that they can’t accomplish with vision, goal setting, hard work and grit.  I don’t take the power of influence lightly.  What I do with it is up to me.