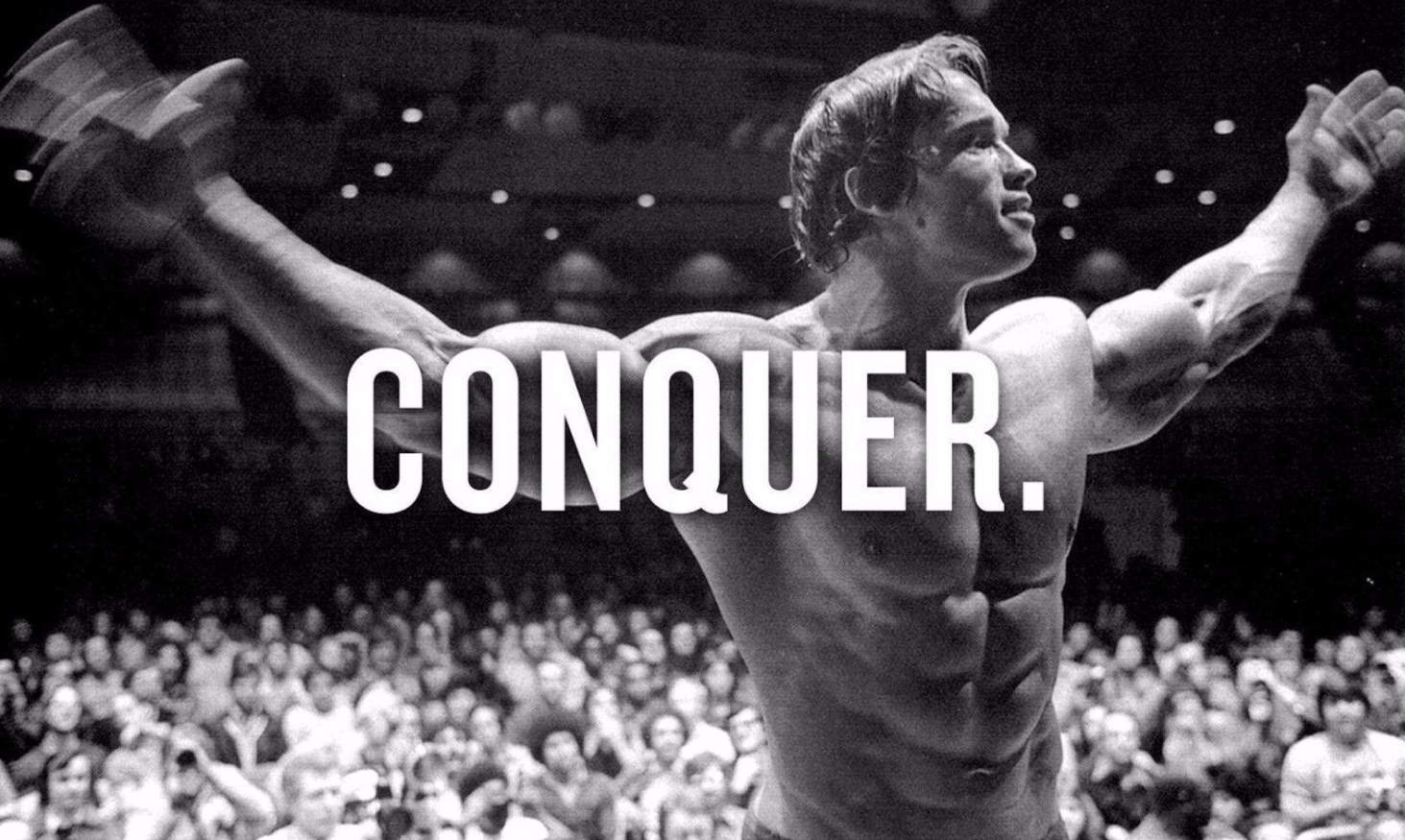 “If I have seen further than most, it is because I have stood on the shoulders of giants.”

Every so often, you have people who come along that completely transform the traditional paradigm. It is truly a remarkable feat of genius and imagination. These are just a few examples.

~ Copernicus. The Origins of the Universe

~ Newton. Calculus and the Buttonhook Theory

~ Darwin. Origins of the Species

These true giants transformed the world as we knew it through creativity and genius.

On a much smaller (but significant) scale, the fitness industry has seen its own set of giants.

And last but not least, for his significant impact in the world of bodybuilding.

When it comes to health and wellness, these giants are the true forefathers in the world of fitness.  In the early days of bodybuilding, exercise physiology and sports nutrition were in their infancy. How much protein to eat or the specificity of training wasn’t as much the primary concern.

These giants had a vision. Their vision was based on experiments, observations, analysis, and conclusions. The gym was the test tube, the research was the pump, the observation was the reflection in the mirror, and the analysis was written on note pads.  Who could have known that years down the road the conclusion would agree with the hypothesis?

Throughout the years, the giants would refine their methods of training:

When it came to food:

Each principle built on the next, creating the next generation of bigger and leaner bodybuilders.  The word (and the looks) spread fast and began to permeate into other areas of sports – football, basketball, track, soccer, and in modern times, golf.

It’s not that science hadn’t studied human motion (kinesiology) or food (sports nutrition)…they just hadn’t explored it to the extremes/specifics that our forefathers had.  The average bodybuilder, outside of the California, New York area, was limited to gossip and opinions.  This is still problematic in modern times.  I found out first hand in my early days of bodybuilding. Everyone had an opinion to give when they found out you were getting ready to compete in a bodybuilding contest — especially the out of shape people.

Fortunately, I stuck with the giants and fruits of my work paid off by winning the 1990 Mr. Texas and 1991 Mr. USA. Those were the good old days.  A lot has happened since then.  I had the opportunity to go back to school. I enrolled in a kinesiology and nutrition class at The University of Texas at Tyler.  As Doctor Phil would say, “Going back to school would provide many Aha moments.”

Trust Your Instincts, Stick With What Works

The kinesiology teacher went through the Specific Adaptation to Imposed Demands (SAID Principle). He continued with muscle fiber types, rest, recovery, muscle fiber tears, aerobic, anaerobic, and anaerobic glycolysis.  The terms were like muscle memory for my brain. I knew these things, but I didn’t know the science behind them. Remember, my knowledge came from the gym.  The nutrition class was just the same – lean proteins, complex carbohydrates, fruits, vegetables, and unsaturated fats.  I ate protein and carbs together every 3 hours. It is the optimal way to stabilize blood sugar and burn fat – I just didn’t know the science behind it at the time.

Again…at the time, my guide was the pump, the reflection, and the notes from prior years.  Sports training has changed over the past 30 years. We now have information that will allow for one to reach his or her goals with specifics that have only been available in recent times.  The thing that I am the proudest of is the creativity and ingenuity that came about from a few “muscle heads” that had the vision, perseverance, and dedication to see their dreams come to fruition. 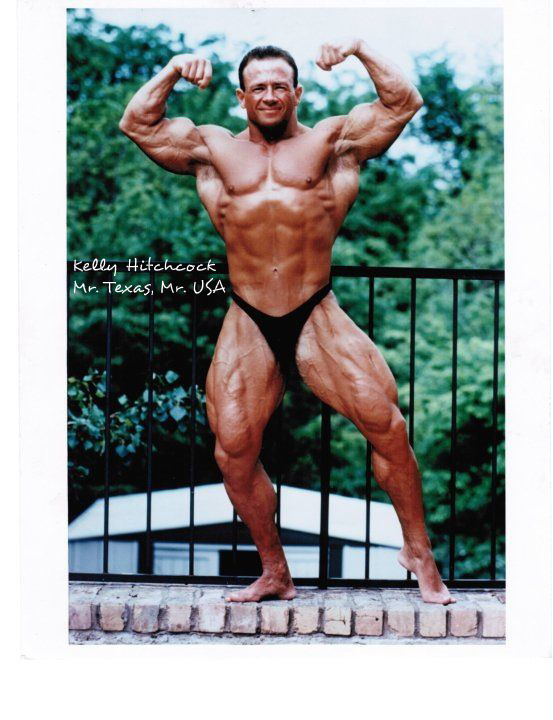 Who would have known that we were right all along?

I’ve mentioned Kelly many times. Kelly was my training partner in the gym back in the early ’90s. I would ride my motorcycle from Far North Dallas to Central Dallas to train with him. He was one of the best bodybuilders in Dallas at the time. I wanted to train with the best no matter how far I had to go to have the opportunity.  Kelly went on to get married and have two kids.

One of his kids, Konnor, played football at Chapel Hill High School in Tyler, Texas. Konnor was a QB. Here are his hudl highlights: 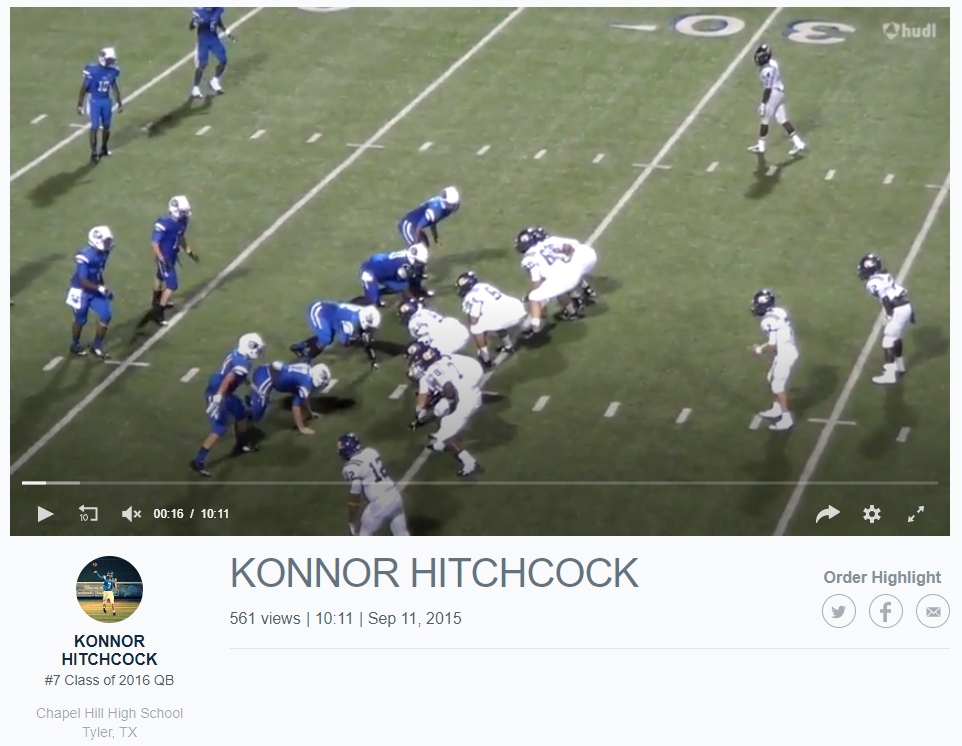 Konnor’s story is one of perseverance.

In his dad’s words:

In high school, Konnor played QB. He had an incredible junior year and had big expectations for his senior year. In the first game of his senior year, he broke his tibia (shin). He returned to play in the last game of the year and threw for 530 yards with 5 TD’s setting a school record. Unfortunately, because of his size and the injury, he only had small offers. I know I’m biased, but I believe he could play at a smaller D-1 school with no problems. His greatest asset is his Stoic personality.

He graduated high school 3rd in his class and had a full ride to Stephen F. Austin through academics. He walked on and made the football team, but soon decided that he needed a change of scenery. Before his scholarship, he was planning on going to Texas A&M and was accepted. After much thought, he decided to go to Texas A&M, and we supported his decision.
The cool part of this story is that he attempted to walk on to the football team two times. He didn’t make it.

His senior year (2019), he tried one more time and made it. It’s a great story about perseverance. A lot of people talked negative about him trying a third time, but he didn’t let that stop him. 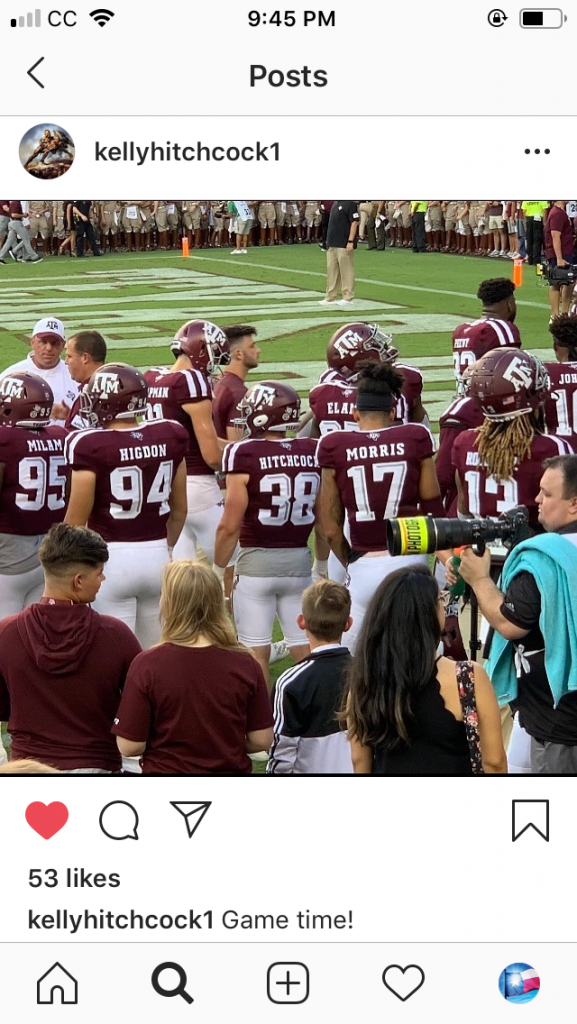 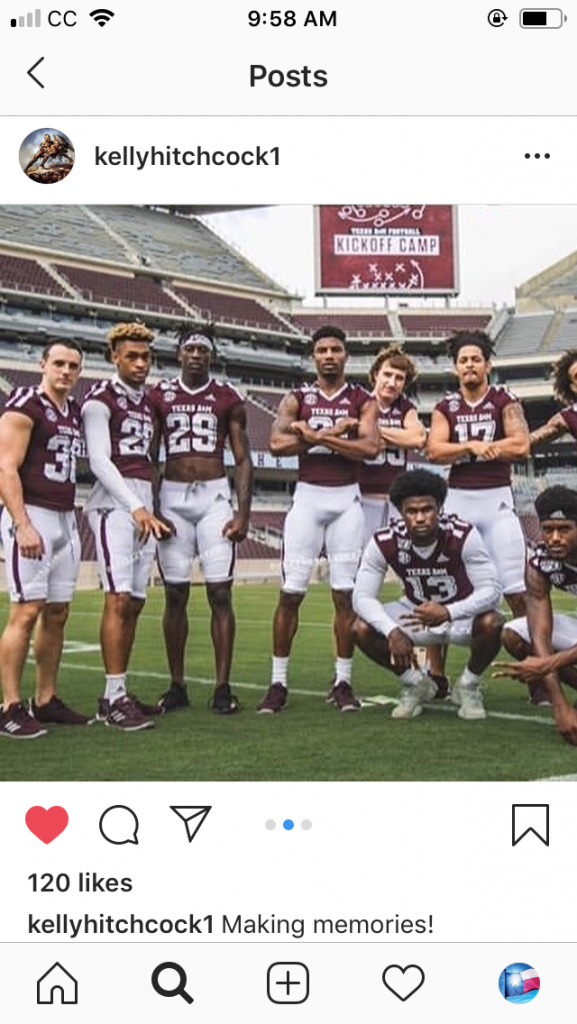 Don’t give up on your dreams.